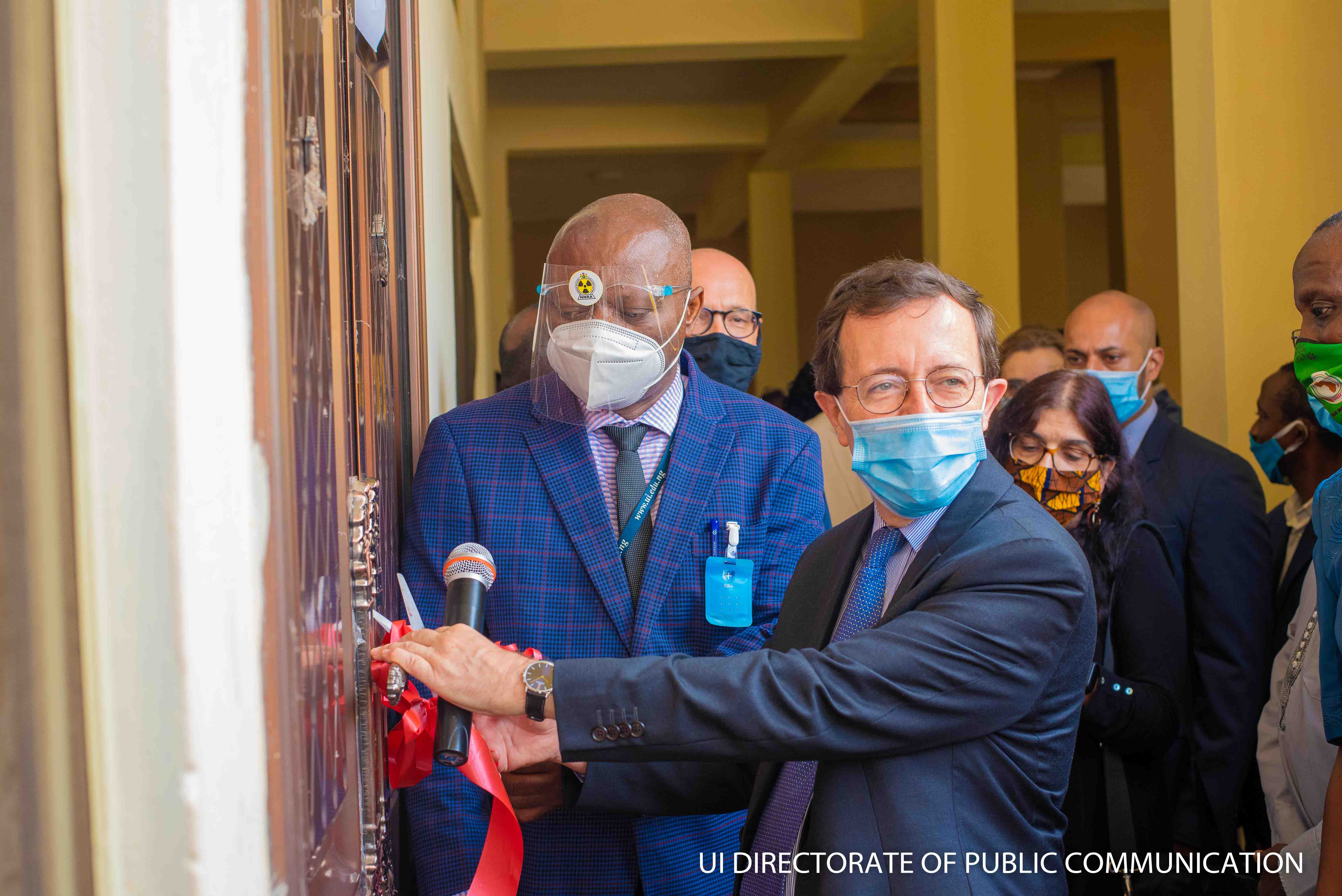 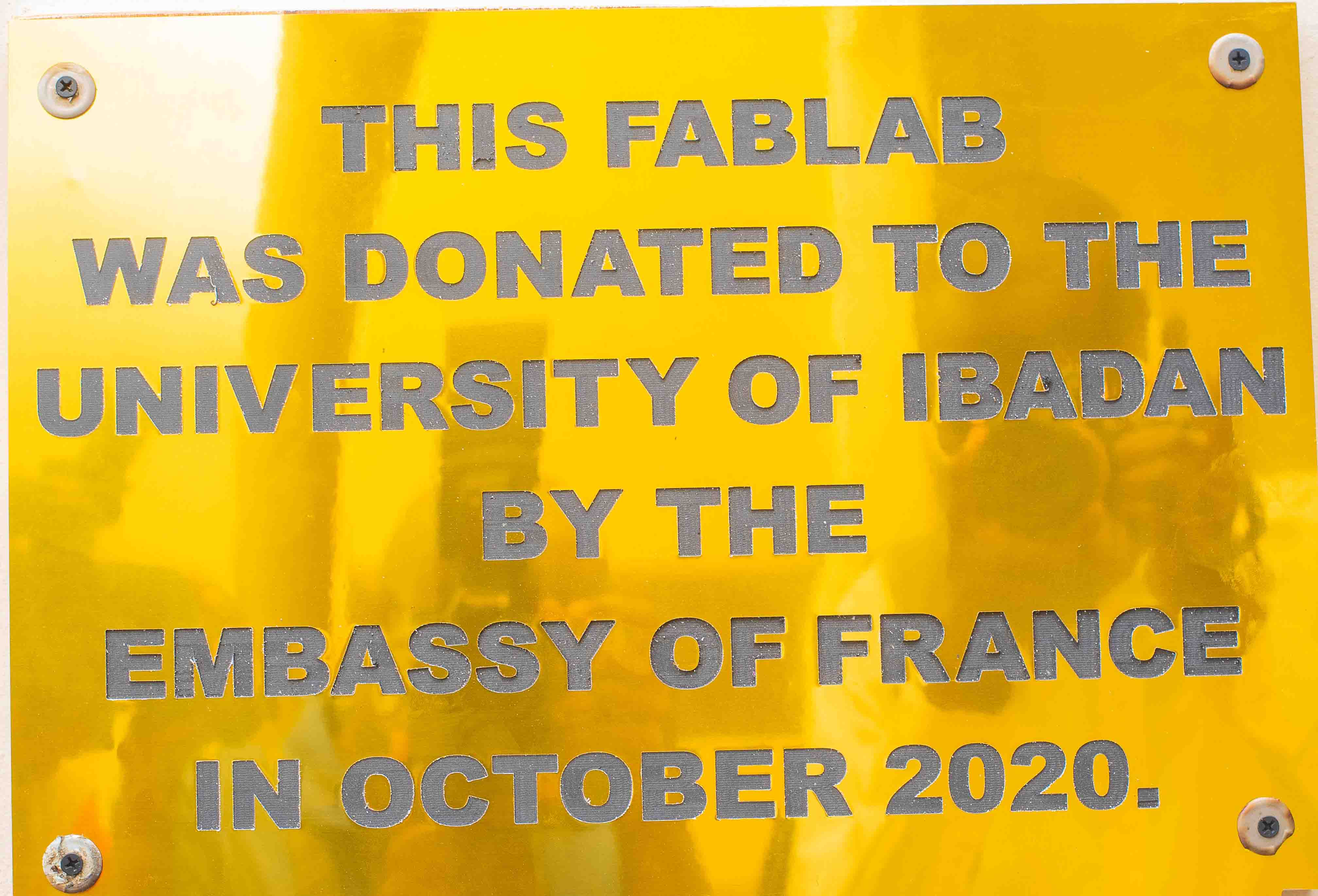 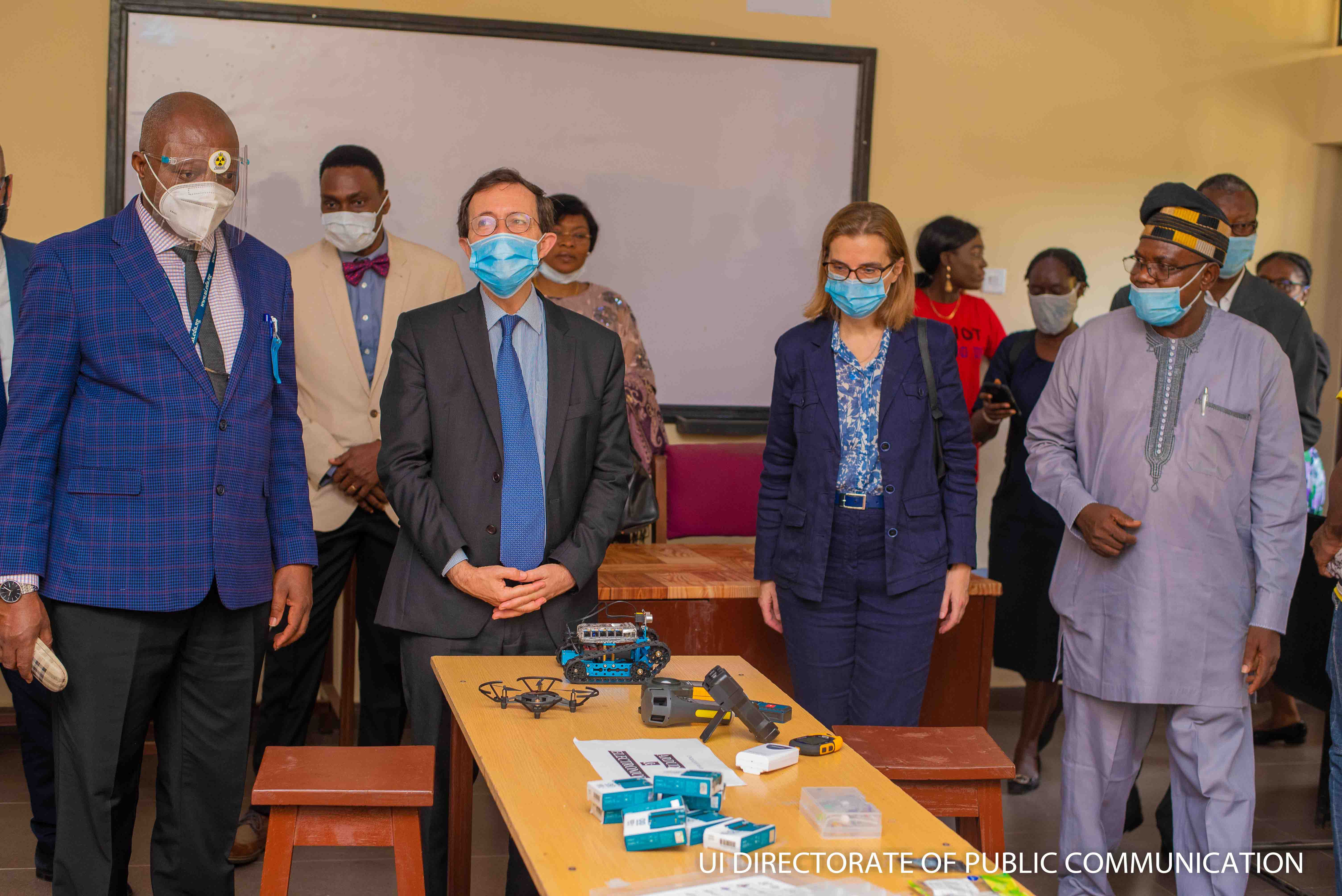 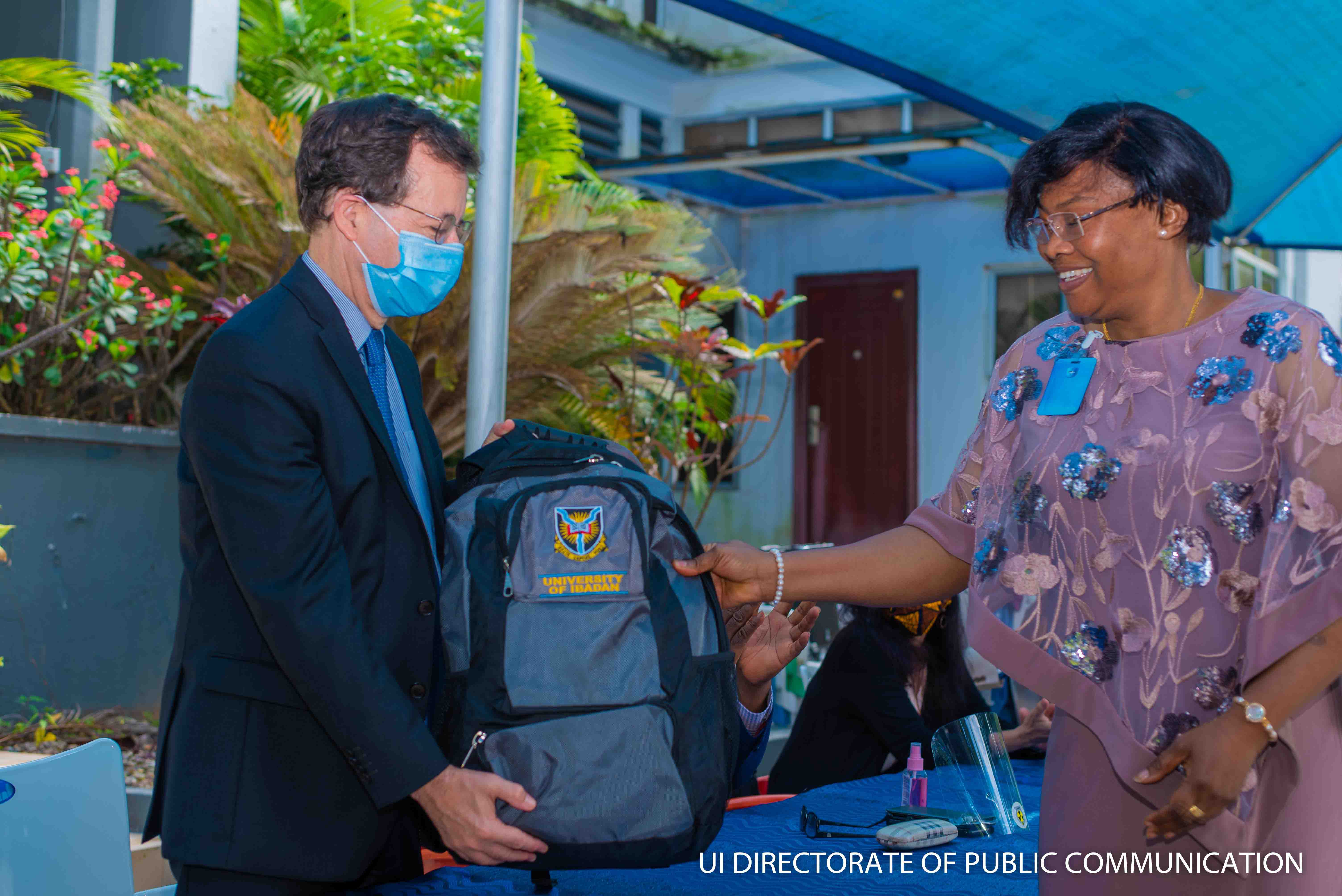 Description:
The University of Ibadan has received the donation of a fabrication laboratory known as FabLab from the Embassy of France in Nigeria on Tuesday, 13 October, 2020. UI is one of the five Nigerian universities chosen to benefit from the collaboration on climate change in Nigeria. The fabrication laboratory, which is part of the Research and Innovation in Adapting to Climate Change (AIRACC) project, particularly conceived to design solutions to adapt to climate change was commissioned by the Ambassador of France to Nigeria, Mr. Jerome Pasquier. The laboratory is placed under the responsibility of the Faculty of Technology, University of Ibadan with Professor Adebola Ekanola, the Deputy Vice-Chancellor (Academic) overseeing the administration of the project for its implementation phase and the first two years of its operation. In his address, the Ambassador of France to Nigeria, Mr. Jerome Pasquier described University of Ibadan as the premier university that has been influential to research and scholarship and has been in partnership with the embassy, which is the reason for establishing French Institute for Research in Africa (IFRA) in UI. He appreciated the cooperation of UI over the years and was full of enthusiasm and hope to launch the new project. According to Mr. Pasquier “University of Ibadan is a good soil that will yield increase in research and scholarship up to the global level.” “My expectation from UI is very high because it is a very good university. I am sure UI will put to good use the equipment we are giving today.” “The equipment are nice but must be used in the best way possible. I am willing to come back later to check how the equipment are being used.” “Globally, I think the comparison between the University and this country is very important. To establish a link between students, it will create the habit of working together and working together for years to come. The best university here is extremely important to us. So, we are very happy to be in the University of Ibadan, and of course, we work with other universities in Nigeria. For us, UI is one of the most important.” Speaking, the Vice-Chancellor, Prof. Abel Idowu Olayinka said he was delighted to host the French Ambassador to Nigeria and his team at the Vice-Chancellor’s Lodge also known as Ayo Banjo Manor on a courtesy call. Receiving the team: Ambassador of France to Nigeria, Mr. Jerome Pasquier; the Consular General of France in Lagos, Mrs. Laurence Monmayrant; Science and Higher Education Attache at the French Embassy, Prof. Leila Mathieu; Head of Cooperation and Culture, Mr. Rafael Pont; Dr. Cyrielle Maingraud, Deputy Director, French Institute for Research in Africa (IFRA), UI and the Lead Consultant on Fablab hub for information and technology, Mr. Antonin Devillers, the VC stressed that the UNIBADAN FabLab will serve scientists, technologists within and outside UI and the country to encourage creativity and entrepreneurship. He thanked the embassy for selecting UI as one of the beneficiaries. “We cannot thank the French Embassy enough for deeming it fit to choose the University of Ibadan as one of the hosting institutions for this FabLab.” Prof. Olayinka also commended the effort of the French Embassy for the training given to three of UI staff from the Departments of Electrical Electronics, Mechanical Engineering and Civil Engineering at Abuja. This training, he said, “is an added advantage as many will benefit from the trained personnel and become trainers too.” He encouraged interested persons to take up the opportunity and have hands-on experience. His words “UI FabLab is ready to accommodate any mind that is ready to learn. Therefore, any work done here must reference the French Embassy because it was donated by the embassy.” “Through the FABLAB, the University of Ibadan will be collaborating with researchers and innovators from other Universities and FABLABs within and beyond Nigeria. It promises to be a place where cutting-edge innovations will be taking place very shortly.” To request for more as Oliver Twist, the VC said: “UI is grateful for the collaboration and still looks forward to more collaborations.” Mr. Pasquier and his team also visited one of French Embassy’s research projects located in the University of Ibadan, which is basically on weather influence on maize and soybeans. The Departments involved in the project include Geography, Physics, Engineering, Agricultural Extension and Rural Development and Soil Resources Management. Mr. Pasquier noted that the project is important for the agricultural economy. Present at the occasion were the Deputy Vice-Chancellor (Academic), Prof. Adebola Ekanola; Registrar, Mrs. Olubunmi Faluyi; Provost, College of Medicine, Prof. Olayinka Omigbodun Provost, Postgraduate College, Prof. Jonathan Babalola; Deputy Provost, College of Medicine, Prof. Fatai Adeniyi; Director of Special Duties, Office of the Vice-Chancellor, Prof. Temitayo Ewemoje; Dr. Eyiwumi Olayinka, Department of European Studies; President, UI Alumni Association (UIAA) and member of UI Governing Council, Prof. Elsie Adewoye; Deputy Registrar, Office of the Vice-Chancellor, Mr. Oluwole Dada; Director of Public Communication, Mr. Olatunji Oladejo and the Deans of Faculties.
Credit:
Directorate of Public Communication