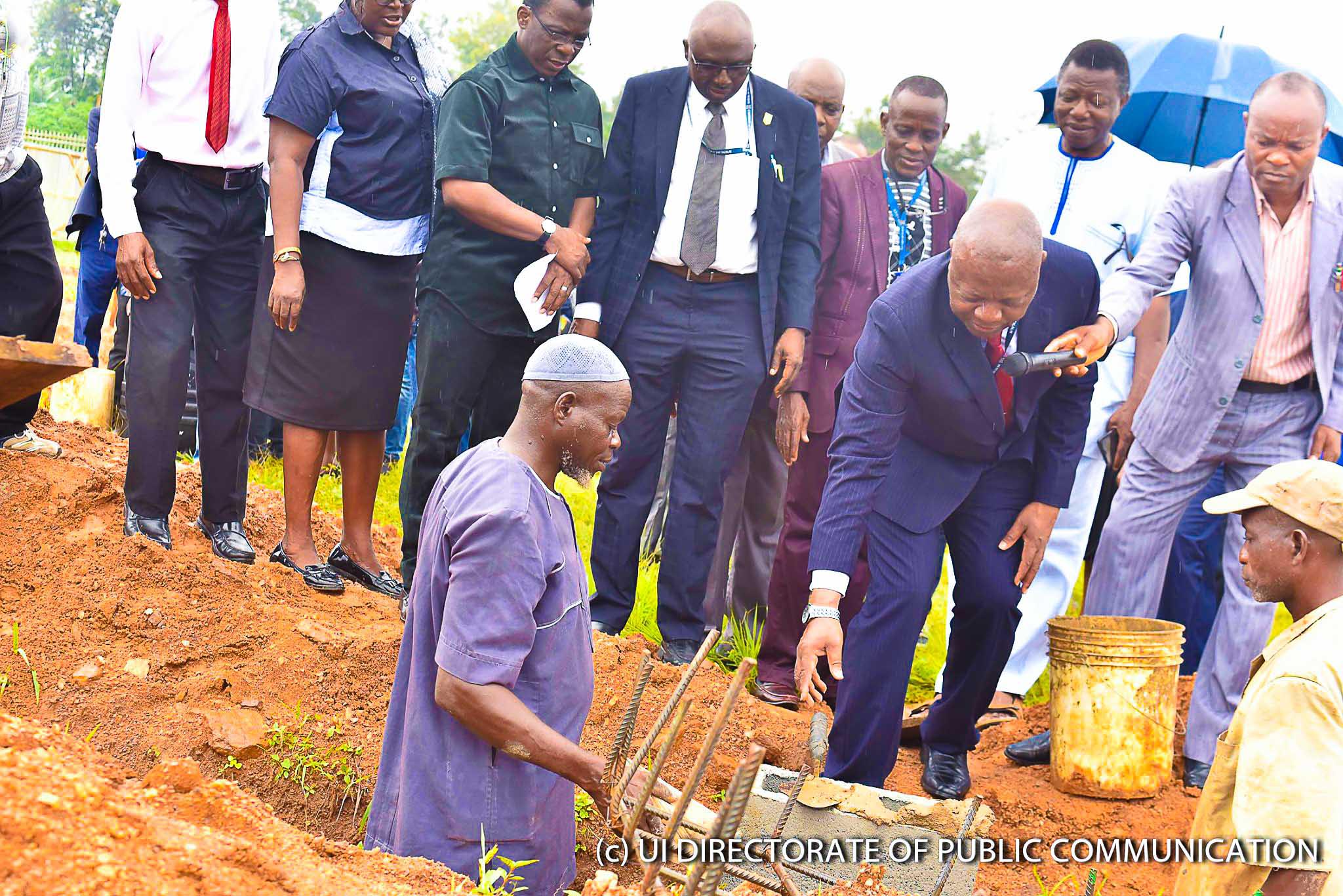 Description:
As part of measures to make administrative and academic work less stressful for both staff and students of the Distance Learning Centre (DLC), University of Ibadan, the Vice-Chancellor, Professor Idowu Olayinka on Thursday expressed confidence in the speedy completion of the new administrative building of the Centre. The VC who also said he is looking forward to the speedy completion of the project made the remarks while turning the sod of the Administrative Building of the DLC, at the Computer-Based Testing Centre, Ajibode axis of the institution. The project which is being executed by the Department of Works and Maintenance of UI is to be completed within thirty-six (36) weeks, which is exactly nine (9) months. Making his remarks at the event, the VC emphasised that the new administrative building when completed would reduce the cost of transportation to the Centre’s Head office situated at Idi-Ose, Moniya and would significantly reduce work stress for both the staff and students. Going the memory lane, Prof Olayinka recalled that Distance Learning Centre commenced its operations thirty years ago and has grown into the most accepted Open Distance Education provider in Nigeria and beyond, noting his excitement at the expected speedy delivery of the project. Speaking earlier, The Director, Distance Learning Centre, Prof Oyesoji Aremu expressed great delight for the opportunity to achieve the feat, adding that the building will further help facilitate both administrative and teaching exercise. He disclosed that the CBT Centre would now be referred to as the permanent site and headquarters of the University of Ibadan Distance Learning Centre. The Deputy Registrar, Distance Learning Centre, Mrs Francisca Ayodele while appreciating the top management staff that graced the event expressed the appreciation of the DLC management team for what she described as "the magnanimity" in approving the construction of the administrative building. She also thanked God for the protection over the staff and students of the DLC in the course of movement from CBT Centre to Idi-Ose, Moniya on a regular basis. The DR also seized the opportunity to request for more cooperation from the management, to see to the speedy completion of the project. UI DLC to complete administrative building in nine months: As UIVC turns the sod The top management staff of the UI Present at the occasion include the Deputy Vice-Chancellor (Administration), Prof Kayode Adebowale; Deputy Vice-Chancellor (Academic), Prof Adebola Ekanola; Registrar, Mrs Olubunmi O. Faluyi; and a former Deputy Vice-Chancellor (Academic), Prof Adeyinka Aderinto. Others are, the Director, University Health Service, Prof Olufemi Akingbola; Director, University Advancement Centre, Mr Adebowale Adeosun; Director, Directorate of Public Communication, Mr Olatunji Oladejo and the Deputy Director (Administration), DLC, Prof David Okurame. The roll call of dignitaries also includes the Deputy Director (Academic), DLC, Dr Musibau Babatunde; Prof Remi Raji; Deputy Registrar and Secretary (DLC), Mrs Francisca I. Ayodele; Deans of faculties and staff of Distance Learning Centre among others.
Credit:
Directorate of Public Communication